Wood is the only renewable resource capable of being used as a building material. We’ve been using it for thousands of centuries up till today, and for good reason. It's cost effective, resistant to the elements and highly capable of withstanding heavy structural loads to name a few.

On the other hand, as a collective we’ve become more conscious about our environmental impact and using natural resources in a sustainable way.

With advances being made in sustainable forest management, we see that wood as a construction material ticks many boxes in both the builder’s and the enviro-conscious individual’s checklist.

Wood is capable of sequestering or storing away carbon throughout the natural life cycle of a building. It has a considerably lower carbon footprint when it comes to production and transportation, compared to steel and concrete. Besides that, timber also looks simply wonderful in contrast to the usual drab tones of city architecture.

Can wood become one of the primary construction materials for the cities of tomorrow, along with steel and concrete? That’s a question for another day, and perhaps another article.

Keeping in line with our previous post about the most influential steel structures, here we'll feature examples both modern and historical, showcasing the incredible utility of wood as a building material. Read on to find out about some of the tallest, largest, greenest and oldest wooden buildings in the world.

Overlooking the largest lake in Norway, ‘The Tower of Mjøsa’ stands a majestic 85.4 meters tall, 18 stories high in the city of Brumunddal close to Oslo.

Mjostarnet was officially crowned the tallest all-timber building in the world by CTBUH (Council on Tall Buildings and Urban Habitat) after its official opening in Spring 2019.

It is a mixed use building - functioning as a hotel, office and residential space.

According to the non-profit Engineered Wood Association (APA), glulam is claimed to be stronger than steel, when measured pound for pound.

All the primary load bearing structures of Mjostarnet were built using glued laminated timber, hence the ‘all-timber’ classification by CTBUH, or as some people would like to call it - a plyscraper.

Glulam is not only used for commercial/public structures but also in the wood framing for homes, where it’s installed in roof beams, floor beams and column headers.

Getting back to Mjostarnet; prefabrication was the favored construction technique for constructing this building. The requisite slots and holes in the framing members were processed and pre-drilled using CNC machines.

The timber framing structures were then assembled on-site and hoisted in place using cranes - put together just like a giant piece of IKEA furniture.

In order to provide lateral strength, concrete slabs were added to the upper floors where apartments are located, giving them more weight and stability against the strong winds produced by the lake Mjosa.


The Superior Dome stadium has the world’s largest wooden dome with a diameter of 163.4 meters and a height of 44 meters. It stands close to the shores of the largest freshwater lake in the world, Lake Superior.

Built on the campus of Northern Michigan University in Marquette, it opened in 1991 with a secondary construction phase completed in 1995. It  has an enormous 100,000 square feet of space with an official capacity of 8,000 attendees.

The Superior Dome is primarily made from wood that is from the Douglas-fir tree indigenous to the West coasts of Canada and the United States. The structure utilized a total of 781 Douglas-fir beams and 108.5 miles of fir decking.

The dome’s wood frame is geodesic in structure . A hemispheric network of interlocking triangles that give it a unique look and provide structural strength, while helping reduce costs, thanks to minimal material usage.

Geodesic domes are commonly found in many stadiums and landmark structures across the world, one of them being the Montreal Biosphere - mentioned in our ‘5 most influential steel buildings’ blog post. Currently the largest geodesic dome in the world is the Jeddah Super Dome, with a diameter of 210 m.

Fun fact: the great architect Buckminster Fuller, a major proponent of the geodesic dome (who also designed the Montreal Biosphere mentioned above), used to live in a geodesic home.

While geodesic domes can also be used for residential construction, their widespread use hasn’t caught on due to numerous practical constraints that we won’t get into here.

Example of a geodesic home

The Bullitt Center is billed as the Greenest office building in the world. It’s self powered via solar energy, utilizes harvested rainwater, and has an on-site waste treatment plant as some of its self-sustainable features.

The building uses a heavy timber frame - a first for an office building in downtown Seattle since the 1920’s.

One could view the Bullitt Center as an environmentalist’s dream come true as far as office buildings are concerned.

Its roof holds 575 solar panels generating enough renewable energy per year to power the building entirely, despite Seattle’s grey climate. In summer months the solar panels generate excess electricity which is sold back to the city’s municipal department.

The solar panels generate approximately 230,000 KWH/year of renewable energy on average, which equates to the building’s annual energy usage. A typical Seattle office for example would use 1,077,000 KWH/ year of energy.

According to the figures from the Seattle Office for Sustainability and Environment, the building’s Co2 emissions are low, so low that they’re equivalent to the emissions of 1 passenger vehicle being driven for almost 2 years.

The building is also capable of providing for its own water needs - both for potable and sanitation purposes. It has the capacity to capture roughly 254,600 liters of rain water, which is harvested from the roof and stored in an underground cistern.

On its way down the water passes through several filters which remove bacteria and purify the water to make it potable and safe for consumption. 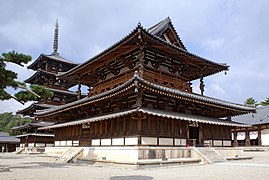 About 12 kilometers from the Nara Prefecture in Japan, The expansive grounds of the Horyu Temple spanning 187,000 square meters house some of the oldest surviving wooden structures in the world.

Amongst those the Main Hall of the Horyu Temple known as the Kondō is the world’s oldest surviving wooden structure, built between AD 670-710 - making it well over 1300 years old.

In 1993 it became Japan’s first UNESCO World Heritage Site in order to give due honour to its historical and cultural importance.

The Hinoki tree
The wood used for creating this structure was the Japanese Cypress, known to the locals as hinoki, and was used extensively throughout the country for building temples and shrines.

Today it is widely used in Japan for the construction of walls, flooring, furniture and the like due to its incredible sturdiness, resistance to rot and widespread availability.

The wood is also known for its distinct scent which it is said to exude even after construction, and some say the Horyu temple still emanates a pleasant lemony scent on a cool, breeze-less summer day.

A unique architectural feature found in the pillars of the temple complex is the subtle curvature in the center, known as ‘entasis’ or dobari in Japanese - a technique commonly noticed in Greek architecture, and claimed to have been imported to Japan from China.

The Horyu Temple is one of the oldest Buddhist temples in the country, and the nearby Nara was a major inlet to the introduction of not only Buddhism from China, but also their architectural techniques.

This temple in specific was built along the plan of a Chinese monastery, and its stone platform for example, is constructed from Chinese models.

Learn more about MWF and its different modules here or see it in action and download your free trial here.

3D Printing in the Built Environment

No spam, we promise! You will only receive essential emails.

StrucSoft Solutions is an experienced developer of solutions for the AEC and manufacturing industry.